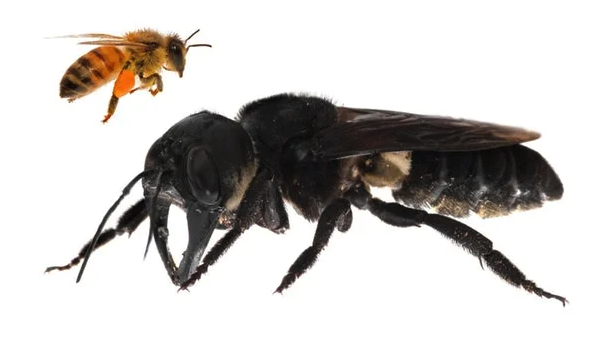 Deep in the jungles of Indonesia, the world’s largest bee nl. ‘Flying Bulldog’ was rediscovered.

The bee (full name Megachile pluto) is a giant insect about the size of a human thumb and lives in the Indonesia island region of the North Moluccas. It makes its nest in termite mounds, using its large fang-like mandibles to collect sticky resin to protect its home from the termites.

The IUCN Red List of Threatened Species lists the bee as “vulnerable”, meaning that while its numbers are relatively solid, the remoteness of its population makes it hard to study.

Several previous expeditions to the region where the bee lives failed to spot it.

Indonesia is home to an abundant variety of flora and fauna but there are fears for some animal and insect communities as forests being cut down for agriculture threaten many species’ natural habitat.

Despite its conspicuous size, no one had observed Wallace’s giant bee — discovered in the 19th century by British naturalist Alfred Russel Wallace and nicknamed the “flying bulldog” — in the wild since 1981, the Global Wildlife Conservation said.