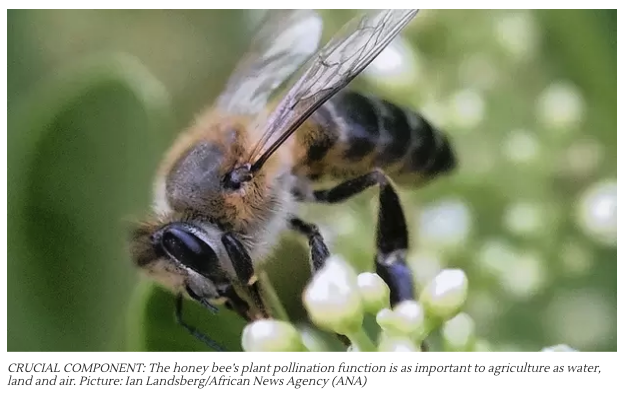 Cape Town – Although the Western Cape’s deciduous fruit industry is currently meeting the pollination requirements needed, the sector is expected to grow as demand for pollination services is set to double over the next decade.

To mitigate this, the Department of Agriculture is working with bee associations in the Western Cape, and has released a new strategy aimed at ensuring the sustainability of the province’s bee population.

According to the South African National Biodiversity Institute, more than 50 different crops in South Africa are reliant on insect pollination, and the honeybee is as important to agriculture as water, land and air.

In the Western Cape, 50% of commercial bee-keepers’ revenue currently comes from pollination services, with the remaining 50% coming from the production of honey and other bee-related products.

However, the bee industry has identified several problems affecting bees, including insufficient forage, theft and vandalism, disease, and environmental hazards, such as pollution, and exposure to external factors such as fires and drought.

The new strategy aims to ensure the ­continued sustainability of the bee population by focusing on five key areas, including: ensuring sustainable bee forage; research and innovation; developing a regulatory framework; transformation in the industry, and governance and stakeholders.

According to the bee industry, the single largest concern was that there would not be enough forage for bees in the Western Cape, as South Africa’s honeybee species rely on both indigenous and exotic species, like eucalyptus, flowering crops and suburban plants to provide forage sources year round.

He said a properly regulated and managed industry had the potential to create jobs and expand the economy.

“The report shows that in South Africa, we import a lot of honey. South Africa has imported 2 000 tonnes of honey annually since 2010, and honey production has dropped to 40% of what it was in the 1980s. This is an agri-processing opportunity: to produce local honey, and honey-related products, right here in the Western Cape,” he said.

Tlou Masehela, the chairperson of the Western Cape Bee Industry Association, said: “This is a detailed plan, and we now have a line of communication with the various government departments. This will require resources – and we must explore ways of getting those. The industry at large should really pull together and make this work.”

This article was sourced from the Cape Argus – June 2018