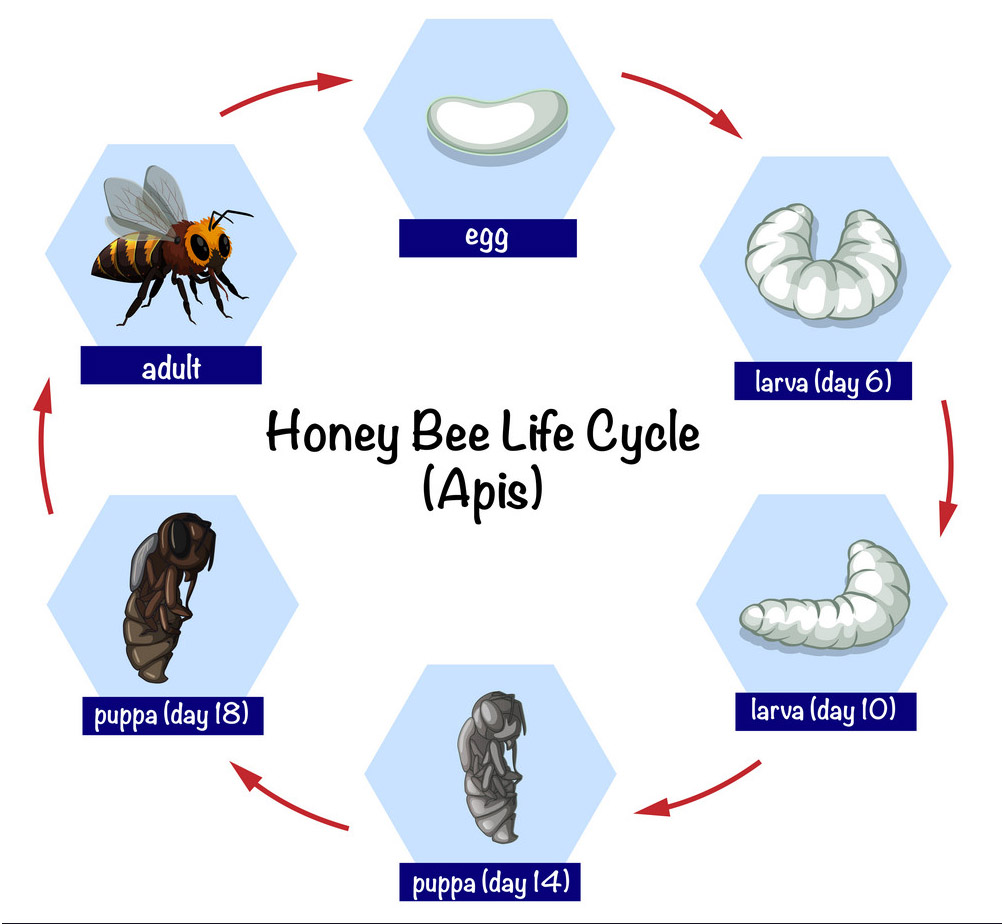 Life cycle of the honey bee 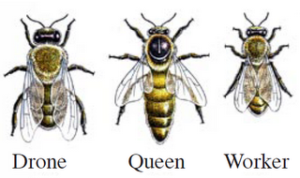 The lifecycle of a honey bee consists of three main stages: the larval, pupal, and adult stages. Within a normal hive situation, a single queen bee lays fertilized and unfertilized eggs. Fertilized eggs can hatch worker and queen bees, unfertilized eggs hatch drone bees. Eggs hatch after about 3 days, but development rates and processes vary among bees within the hive, as well as between species in the genus Apis.

Worker bees are female bees that hatch from a fertilized egg. After hatching, the bees spends an average of six days in the larval stage. During the first few days larvae are mass-fed a compound known as “worker jelly” or “brood food”- a mixture of fluids produced by the hypopharyngeal food glands and the mandibular glands of adult worker bees. Larvae are fed between 150-800 times per day for up to three days before the diet is changed to a less rich content and less frequent feeding schedule. During the larval stage fat bodies are built up that are able to store lipids, glycogen, amino acids, and mitochondria bodies for later use in the pupal stage. After eight or nine days, the brood cells are capped and the larvae molt. They begin to spin a cocoon with silk produced from thoracic salivary glands, this marks the beginning the pupal stage.

The pupal stage is when most parts of the adult bee form; the wings, legs, abdomen, internal organs, and muscles. Pupae draw upon the stores of the fat bodies built up during the larval stage during this period of growth. Stored lipids, amino acids, and glycogen fuel the continued growth of the developing pupa. After about 20 to 21 days, the pupa chews through the brood cell cap and emerges as a teneral or callow bee. These newly hatched bees do not leave the cell for three to four hours, as they have a soft skin, or cuticle, that takes time to harden.

Once emerging from the brood cell, bees must feed within a few hours. Without the bacteria and proteins that ingesting pollen brings, the development process and lifespan of the bee can be threatened. Young bees spend the first one to three weeks of their lives carrying out functions within the hive. These tasks include feeding and cleaning larvae, cleaning the hive cells, building comb, guarding, patrolling, accepting pollen from foragers, storing, curing, and packing pollen, and more. After about three weeks the glands that produce larval food and wax begin to degenerate. The bee moves from the brood nest and begins integration into the life of a forager.

Queen bees and worker bees both hatch from fertilised eggs. The only difference between these two bees is their diet. Special cells, known as “queen cups”, can be constructed by worker bees in which an existing queen will lay eggs into. Larvae in these queen cells are mass-fed with a royal diet for the entirety of their larval development. The royal diet contains three different stages. In the first stage, a white fluid produced by the mandibular gland is fed to larvae for three days. The next dietary stage involves a half-and-half mixture of secretions from the mandibular and hypopharyngeal glands. In the final two days of larval life, honey is added to the queen larvae diet. The addition of honey provides a increased sugar content as well as high levels of a hormone known as juvenile hormone. High levels of this hormone alter the development of the body by inducing the production of hormones and proteins specific to producing the anatomy of a queen bee.

When a queen bee first hatches, she is known as a virgin queen. One of her first priorities upon emerging is to eliminate the presence of other queens. This process usually involves the killing of an existing queen and/or additional queen larvae. Six days after emerging, the virgin queen will leave the hive on a mating flight on which she will mate with up to 20 drones. When the queen’s sperm sac, or spermatheca, is full she returns to the colony. Once having mated, the queen will never leave the colony again, unless in the case of swarming. Three days after mating, the queen will begin to lay up to 1000 eggs a day for the rest of her life. Queen bees, on average, have a lifespan of two to five years and can lay around 200,000 eggs a year. Queen rearing is a process brought about by the worker bees to produce a new queen.  When a hive is preparing to swarm, has a queen preforming at a substandard level, or when a queen is lost or dies, the worker bees will begin construction of new queen cells to host a queen, or will adjust the diet of a worker larva to produce a new queen.

Drone bees make up about 15% of the colony population. Being large in size, they are distinguishable from the queen by the tapered shape of their abdomen. Drones are the only males in the hive, hatching from unfertilized eggs laid in larger cells by the mated queen. Drone larvae are fed a modified version of the worker bees diet that includes increased quantities of pollen and honey. After four to five days of feeding, drone cells are capped- their appearance distinguishable from other capped cells by their increased size and dome-tipped shape. Newly emerged drone bees are fed a combination of pollen, honey, and brood food from nurse bees until they are mature enough to feed themselves from the hive honey stores. Adult drones never collect food, secrete wax, or feed the young. They lack a stinger as well as a long tongue suited for nectar collection. Drones are often referred to as “flying penises” as their sole purpose is to mate with virgin or newly mated queens. They first leave the hive about six days after emerging, flying to areas known as drone-congregating areas, or DCAs, only returning to the hive after a failed mating outing. The few drones that do succeed in mating with a queen die shortly after.

Drones typically have a lifespan of eight weeks, although it is relative to when he succeeds in mating with a queen. Not being essential an essential factor in the function of the colony, pressured situations, such as a nectar shortage or the onset of fall, may lead worker bees to cannibalize or clean out drone broods and/or expel drones from the colony.

Unfertilized eggs can be laid by mated queens, unmated queens, failing queens, or by laying workers. In all situations, male drones capable of mating will hatch. In the case of laying worker bees, this usually will come about as a result of the colony being unable to rear a new queen.

Article source: Life cycle of the honey bee by Lanzac23