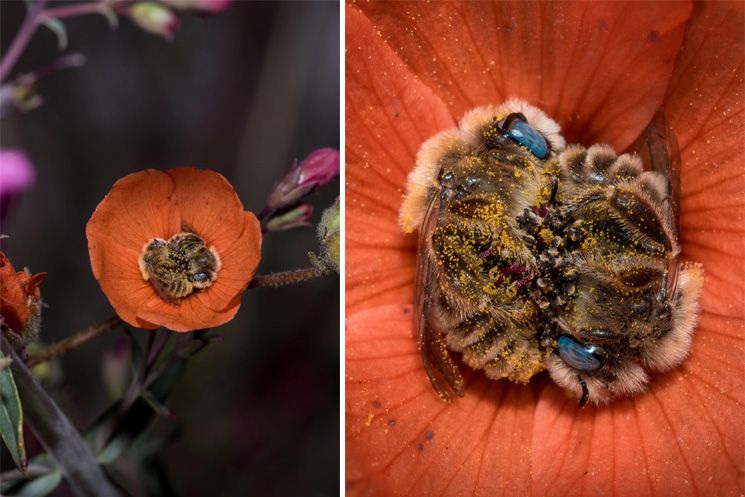 Adorable image of sleeping bees as captured by Joe Neely of JMNeelyphotography.com

Do bees sleep, do they sleep at night, and if so, where and how do we know they are sleeping?

As one of the most studied creatures on the planet, it’s no surprise that scientists have asked many questions, including “do bees sleep?”

First, some simple questions and answers, but further down the page, we get into the science, in case you want to read it!

Please note, that all of the research contained in this article relates to honey bees.  I make some remarks about bumble bees later.

Do bees sleep?
The short answer to the first question is: according to scientists, YES, bees do sleep!

How do we know bees sleep and how do they sleep?
Scientists have looked at how humans and other mammals sleep, and they have found bees do similar things.  For example, just as humans (and other mammals) take on a very relaxed posture, and go through different phases of sleep (relaxed, light sleep, deep sleep), so do bees!

So how do they sleep and what do they look like when they are sleeping?
It turns out that when a bee is in deep sleep, their antennae droop downwards, the upper body (thorax) drops as does the tip of the abdomen (or tail), and the wings rest on the body.

Look closely, and you can see this in the images below.

Note how in the first image (A), the bee is alert: it has wings up and extended, the whole body is off the ‘floor’, and antennae are facing forward.

Note the changes in the body posture as the bee falls into a deep sleep – in picture D!

Scientist also found that body temperature of bees drops when they sleep (it does in humans too!) and that the deeper a bee is sleeping, the brighter the light needed to wake the bee – again, a little like humans.  Finally, certain distinct patterns happen in the brain when bees are sleeping.

In honey bees, there is some variance depending on the role within a colony.  Forager bees – the older bees within the colony, are active during the day, but sleep at night back in the nest or bee hive.

However, foragers go through different sleep stages of light sleep and deeper sleep, and when awake they may be immobile (not moving) or may groom.

Very young worker bees (whose duties include cleaning the cells), also sleep in the hive or nest, but they have no fixed pattern of sleep as the foragers do. Instead, they may be active during day or night, with periods of sleep in between,  spread out over a 24 hour period.  Scientists say they found no consistent differences in the percentage of time that foragers and young workers spent sleeping.

However, scientists suggest that all the interaction with other bees at the hive, is possibly what makes young bees sleepy and in need of regular naps, in particular, because of all the information they are receiving from and giving to other bees!

What about bumble bees?

I have not found a specific piece of research investigating this, but I certainly believe bumble bees sleep, and in particular, I have come across bumble bee males in the morning, apparently sleeping on flowers.  They are immobile, with drooped antennae, and it may take a little while for them to wake up!

What do bees do when they wake up?

Researchers found that the first thing honey bees do, is groom when they wake.   They may then either go back to sleep, or get on with their usual roles within the colony (see above).

Where do bees sleep?
In honey bees, it all depends on the role within a colony.  Research found that foragers (the older bees) sleep toward the perimeter (edge) of a nest or hive, whereas younger worker bees sleep inside cells and also, closer to the centre of the nest.

As stated above, I believe bumblebee males may sleep outside of the nest (at least sometimes) on flowers.  I have seen them on cosmos, lamb’s ear, buddleia and lavender among others.

Why do bees need sleep?
It seems bees need their sleep, because otherwise (just like humans), their performance is hampered.  Scientists found that bees deprived of sleep would have difficulty learning a new route home, and were not able to waggle dance properly, and they may also show signs of sleepiness during the day.

How can we know whether bees are sleeping?
Is it really possible to prove whether or not bees are sleeping, or is it merely guesswork on the part of scientists?  Scientists may have cracked the code behind the honey bee waggle dance, but how can scientists really know whether a bee is asleep or not?  To answer this question, scientists say that it all depends on how we define ‘sleep’, and it seems that the state we refer to as ‘sleep’ in humans and mammals is also witnessed in bees!

Put another way, when we identify and define the criteria for what we call sleep in mammals, it seems similar states are exhibited by honey bees when they are at rest, such that it can be said that they are indeed sleeping.

Sleep in honey bees is similar to mammals in the following ways, including:

So here is the proof, according to scientists, that honey bees exhibit ‘sleep’ behaviours:

Sleeping Posture
Honey bees sleep with their thorax (upper body), head and antennae relaxed, and the sleepier and more deeply asleep, the more relaxed the bees’ body becomes, as is the case for humans.

Again, you can see this happening in the images below.  In the first image (A), the honey bee is awake, but immobile.  Her wings are up, as are the antennae, and her body is off the floor.  As the bee passes through different stages of sleep, the wings relax, the antennae point downwards, until eventually (as can be seen in photograph D) the tip of her abdomen is on the floor, and her thorax (upper body) is lowered.

Again, this amazing set of photographs above of a honey bee sleeping, is from the research paper by  Eban-Rothschild and Bloch as detailed earlier.

This characteristic posture as shown in D is associated with a decrease in muscle tonus and body temperature, and an increase in response threshold, measured both neurophysiologically and behaviourally (Kaiser and Steiner-Kaiser, 1983; Kaiser, 1988).

When forager honey bees were in deep sleep (determined as periods lacking antennal movements), then this correlated with rhythmic electrophysiological activity in the brain, including the mushroom bodies (Schuppe, 1995). There are three specific classes of neurons that make up the mushroom body lobes: α/β, α’/β’, and γ-neurons, which all have distinct gene expression.

An elevated response threshold
Further research found that the deeper the sleep, the greater the stimulus needed to induce a bee to respond.  This was tested using light.  Honey bees that were more awake responded to a lower intensity light source with movement, than bees in a deeper sleep state. A higher intensity light source was required to facilitate a response from bees in a deeper sleep state (Eban-Rothschild, A. D. and Bloch, G. (2008).

Do bees need sleep?  Do some bees sleep more than others?
Yes, as stated previously, it seems bees need their sleep, or, just like humans, their performance is hampered:

“We found no consistent differences in the percentage of time that foragers and callows [the young workers] spent sleeping ….. In the experiment with bees from colony H3, callows slept more than foragers (t-test, P<0.05), whereas in colony S25 callows slept less (P<0.05). It is not clear whether this variation across trials reflects genetic differences between colonies, or stems from variability in experimental procedures (lab vs hive environment before monitoring sleep.”

Sleeping patterns
Again, in research in honey bees, it really depends on the role the bee has within the colony.
The foragers are the older adult bees.  They spend the day foraging and sleep at night, and have a well defined sleep pattern, although their sleep patterns are characterised by phases.  But what about the younger worker bees?  When do worker bees sleep? Eban-Rothschild and Bloch found they remain active until sunset, with periods of sleep in between.

Where bees sleep – by role in colony?
Honey bee workers typically progress through a chronological sequence of task-based castes (or rank), beginning adulthood as cell cleaners, later tending brood and queen as nurse bees, then receiving and storing nectar as food storers, and ultimately serving as the colony’s foragers, thus foragers being the older worker bees in the colony.

Scientists investigated whether role within the colony influenced where the bee sleeps.  Older worker bees generally slept outside cells, closer to the edge of the nest, in cooler areas, and away from uncapped brood. Younger worker bees generally slept inside cells and closer to the centre of the nest, and spent more time asleep than awake when surrounded by uncapped brood. The average surface temperature of sleeping foragers was lower than the surface temperature of their surroundings, offering a possible indicator of sleep for this caste. (Klein, Stiegler, Klein and Tautz,2014).