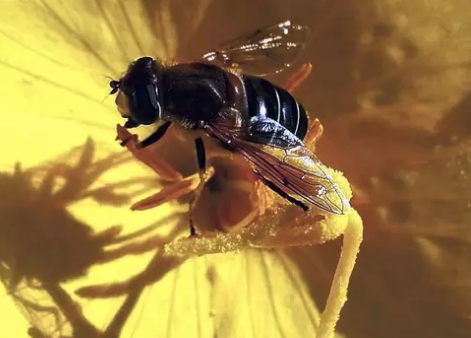 Breaking new ground by tracking pollen from A to Bee

Cape Town – Pollination biologist from Stellenbosch University Dr Corneile Minnaar is breaking new ground in a field of research that has been hampered by a lack of a universal method to track pollen for more than a century.

Despite more than 200 years of detailed research on pollination, Minnaar said researchers did not know for sure where most of the microscopically-tiny pollen grains land up once they leave flowers.

In an article published in the journal “Methods in Ecology and Evolution” this week, Minnaar described the method, which will enable pollination biologists to track the whole pollination process from the first visit by a pollinator to its endpoint – either successfully transferred to another flower’s stigma or lost along the way.

“Plants produce massive amounts of pollen, but it looks like more than 90% of it never reaches stigmas. For the tiny fraction of pollen grains that make their way to stigmas, the journey is often unclear – which pollinators transferred the grains and from where?”

Minnaar said quantum dots were semiconductor nanocrystals that were so small they behaved like artificial atoms. When exposed to UV light, they emitted extremely bright light in a range of possible colours.

“I decided to design a fluorescence box that can fit under a dissection microscope. And, because I wanted people to use this method, I designed a box that can easily be 3D-printed for about R5 000, including the required electronic components,” Minnaar said.

So far the method and excitation box have proven itself as an easy and relatively inexpensive method to track individual pollen grains, Minnaar said.

“I’ve done studies where I caught the insects after they have visited the plant with quantum-dot labelled anthers, and you can see where the pollen is placed, and which insects actually carry more or less pollen.”

But the post-labelling part of the work still requires hours of painstaking counting and checking, Minnaar said.